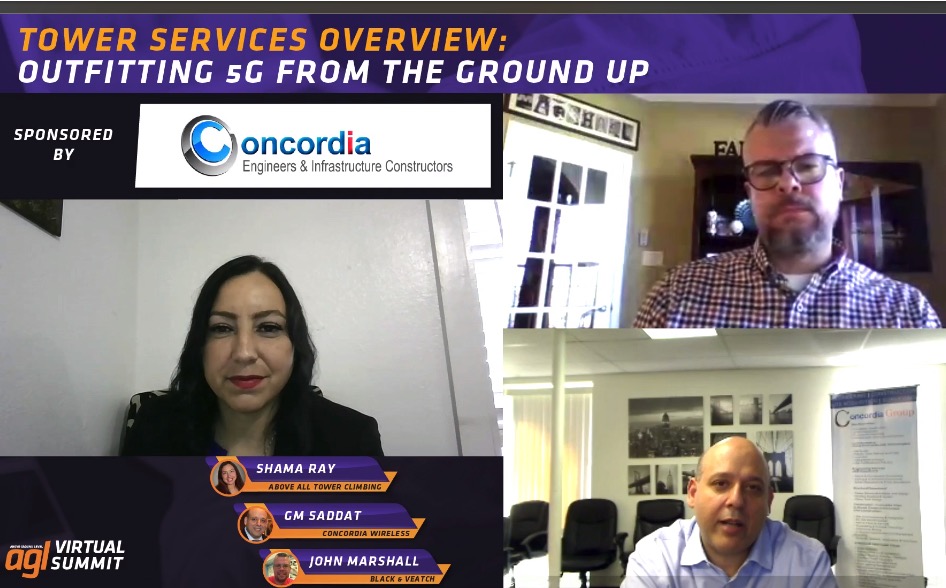 When China’s industrial output dropped because of its COVID-19 pandemic lockdown in the first quarter, it caused delays in the equipment vendor supply chain for the wireless infrastructure industry, according to a panel during the AGL Virtual Summit in November, which was moderated by Shama Ray, owner, Above All Tower Climbing.

“It was just a part of the challenges caused by the pandemic, but material shortages have been an eye-opener,” said GM Sadat, chief engineering officer at Concordia Wireless. “We got stuck because we could not find 200-amp breakers. We found used breakers and even looked for them on Ebay.”

The shortage of materials reinforced Sadat’s belief that the United States should bring more of its manufacturing back into the country.

Along with the lockdown in China, which reduced industrial output by 25 percent in February, shipments at the Port of Los Angeles were down 20 percent during the first five months of 2020, according to the Maritime Executive news outlet. With restricted supplies, demand remained steady, according to Sadat. “COVID or no COVID, we were still building,” he said. “The only thing that stopped people was lack of material.”

Black & Veatch saw the effects of equipment shortages slow its work on a number of sites. John Marshall, the company’s vice president and program director, said, “We had less equipment on site and fewer people employed to build the sites. It affected a lot of families across the board because we just couldn’t get the equipment to install.”

The pandemic continues to affect work crews as they travel from site to site. Construction crew members are a matter of concern because of their travel schedules and the work they perform in deploying systems in healthcare facilities, according to Sadat, but he said that Concordia has not had any COVID-19 cases among its workers so far.

“There are challenges because they move from hotel to hotel,” Sadat said. “So we have create procedures for sanitizing rooms and additional safety procedures for working in hospitals.”

Black & Veatch has reduced the amount of travel required of its crew members, relying more on local crews in each state. “We are trying to keep people from traveling,” Marshall said. “We try to keep our field employees from moving state-to-state. We try to keep each person working in the same state or area.”

The pandemic has been hard on the jurisdictions, which have had to alter their practices to allow their government employees to remain socially distant.

“We are seeing a dramatic slowdown on permitting,” Sadat said. “When we do get a permit, then we have to go find a crew. Overall, the pandemic has slowed things down, but where there is a will there is a way.”

On the Brighter Side

Nevertheless, there have been some upsides to the current pandemic. Concordia Wireless, which is based Carol Stream, Illinois, has expanded from operating regionally to nationwide, working with engineers in California, Texas, Massachusetts and Florida, among others.

“We pushed out 100 laptops to our employees and told them to go home, and it has allowed us to become a nationwide company, because we are no longer based in one area,” Sadat said. “Some employees have even moved south to warmer climes without losing seniority.”

Black & Veatch has revisited its business practices that were centralized in its headquarters in Overland Park, Kansas. “In the past, we thought we had to be in the same office to work as a team,” Marshall said. “It has shown us that we can all work remotely and still be effective. It has caused us to question whether we need a large building with all these people in it.”

Not to be forgotten in 2020 is the roll out of 5G radios to cell towers, which has changed the game for crews in a number of ways. Wireless services company are deploying dual-band radios, instead of single-band radios, and are running fiber using a dedicated path to the 5G radios.

“Today’s towers have a 5G, 4G and a little 3G,” Sadat said. “The days of operating a single network are over.”

5G antennas on macrotowers are beefier. With the move to massive MIMO, the industry has moved from four-port antennas up to 12-port antennas. However, with small cells, the reverse is true.

“On the macrotowers, the antennas are getting bigger and bigger, and there are more radios on top because of the multiple technologies that are still in use; but in the small cells, things are getting smaller. Everything is integrated inside,” Marshall said.

Nonetheless, the increase in technologies on the tower and expanded access to various spectrum bands are making tower deployments more complicated today than ever before.